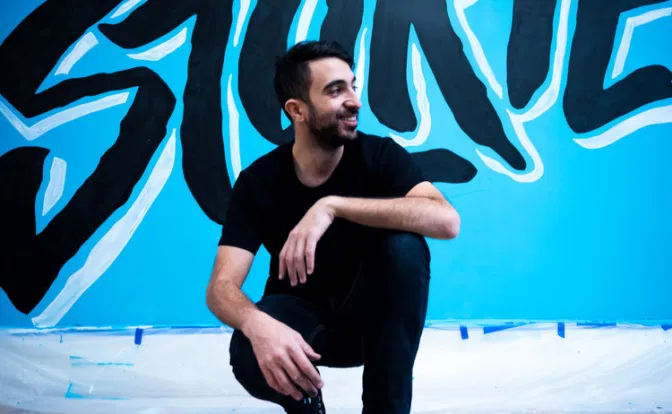 Will Pay: How a New York City Muralist Got His Start

If you’ve walked past one of Will Pay’s New York City murals, you will probably recognize his work—his stylish lettering and muscular use of color picks you up by your ankles and shakes the loose change out of your pockets.

Pay describes his freelance muralist career as a “side hustle on steroids.” He’s also the full-time creative director for GIR: Get It Right, a design studio that makes custom silicone tools, and his day job allows him to be choosy about which freelance projects he takes.The COVID-19 pandemic underlined the uncertainty that makes Pay reluctant to give up a full-time gig. Like so many freelancers, he saw exciting projects evaporate in its wake: “For the past 2 to 3 months, I was designing a tour bus. I was super excited about it. I had never designed a tour bus before, and it was the biggest piece I had ever done. But due to social distancing, the company decided that a tour bus was not the right thing to do. I was pretty heartbroken.”

Pay hasn’t given up on the project, and still hopes that one day his bus will see the open road. It’s this optimistic streak that got him his start with freelancing.

In 2012, a company called Contently needed a muralist for a 12-foot by 12-foot wall. Pay reached out, and before he knew it, he had the gig. Then, panic set in: He had never worked on anything that big before, so he got a ladder and started painting his bedroom wall. He painted until he had the technique down pat. “Whenever you’re doing your first job, you’re not really qualified to do it,” Pay says. “As a freelancer, you have to learn on the job, but you can make it so that you’re being paid to learn.” Pay adds, “I didn’t tell [Contently] that, of course.” Pay recommends aspiring muralists practice however they can: “Do graffiti. Get in trouble. You can always get a bucket of white paint and paint it over.” (Please note: We can’t help you if you get busted by the NYC Anti-Graffiti Task Force, and we’re pretty sure those fines aren’t tax-deductible.) The Contently gig parlayed into more work, thanks to some savvy multitasking. “I had a friend who's a photographer with the New York Times, and I had him shoot me with the wall.” Those photos ran in a Times article about Contently, significantly upping Pay’s visibility.

Even after his success with his first client, Pay experienced the growing pains that any freelancer will find familiar. Early in his career, he took on low-paying work for the sake of experience. He remembers a bagel shop in Bay Ridge that hired him to design their chalkboards, and, “From the jump – I knew there was something weird.” His instincts proved correct, and one morning, at around 4 AM, he got a call from the manager accusing him of stealing.Pay didn’t yet have the experience necessary to tell the client where to get off: “I was a younger designer, and I didn’t know how to handle the situation. I tried to force it and make it work.” When he asked for payment, the owner pulled cash out of the register, in an amount short of the agreed-upon fee. “Seeing what a spiraling shitstorm it was,” Pay agreed to settle. Now, he advises freelancers to always “get a contract. It doesn’t have to be anything too complicated – it just has to cover how you will communicate, payment, terms, and delivery dates.”

When naming a price, Pay recalls solid advice from a teacher: “If you tell them how much it costs, and they don’t gasp, you didn’t charge enough.” He also has an ingenious strategy for charging for jobs he doesn't want: “Say ‘NO.’ N plus O.” In this formula, “N is the number you would normally charge,” followed by a zero. If you would normally charge $500, ask for $5,000. “Nine times out of 10, they say no,” Pay says. “But that one time they bite, it’s payday.”

Life with two demanding jobs probably sounds like a struggle. Pay makes it work by simplifying his life wherever possible – he has 5 pairs of the same pants, and 30 of the same shirt. And yet, despite having the streamlined closet of a cartoon character, Pay admits that there are areas of freelancing that he hasn’t mastered. “I take care of my own taxes. It’s definitely a headache. When it comes to the end of the year, I never know how much I owe.” There’s a lot that goes into freelancing that many don’t consider until it’s too late. When you’re working a dull day job, it’s easy to “aspire to a creative lifestyle,” Pays says, but he wants to remind potential freelancers that “it’s a lot of grunt work. Lots of paperwork and negotiating.” But for Pay, murals have a huge payoff, because painting “feels so good that it doesn’t feel like work.”

‍Would you like to be featured on our blog? Just fill out this survey and we'll get in touch.

‍The Freelancer’s Guide to Getting Started