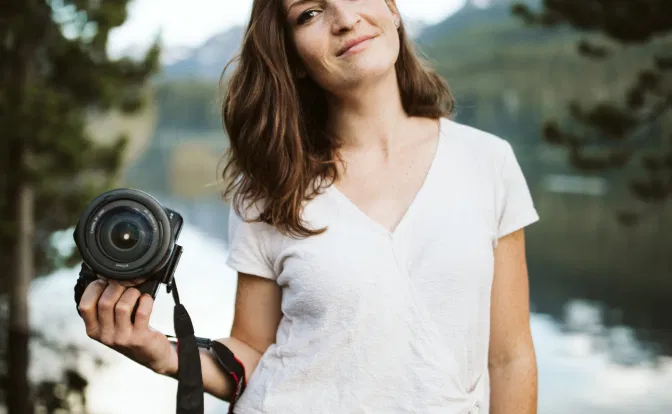 Diana Davis: How a Photographer Wrote Her Own Story

Diana Davis just started offering career coaching sessions from her home in New York, the latest chapter in her path as a solopreneur. “At this point, I truly am an entrepreneur,” she says. “I don’t feel like a freelancer, bouncing from project to project.”

Instead, she’s building a brand, and following a vision. In her cohesive strategy, her passions and her work seamlessly intersect: “I mainly work with entrepreneurs in health and wellness,” she says. “Partially because I’m obsessed with health and wellness — those are the people I hang out with anyway.”

Whether through photography, graphic design, or career coaching, Davis wants to help her clients tell their story. She doesn’t have a formalized course yet, although that’s in the works: “If you DM me asking for a call, we’ll talk. Right now they’re just strategy sessions. We do a deep dive into whatever your pain points might be: your Instagram strategy, your website, or pitching.”

Coaching comes naturally to Davis. In fact, she sees it as an extension of the mentoring she was already doing for her photography clients. Her ideal client has a well-defined need, like building an Instagram presence, or developing the confidence to sell themselves. “I always tell my clients: People buy people. They don’t buy products,” she says. “When you’re a small business, it’s really important to share your story, because that’s how you’re going to stand out. There are a million yoga instructors. But they’ll go to you because they relate to you.” she says. “There are a million photographers out there. Clients choose me because they relate to me. Tell your story authentically, and you’ll attract your ideal client.”

Imposter syndrome comes for everyone. When she started coaching a few weeks ago, Davis says, “I was so nervous. I thought people would say: “Who does she think she is? How is she qualified for this?” But her efforts have been rewarded — she’s seen a flood of DMs, as well as 20 sign ups in the first few days following her announcement. “The response has been the best I’ve gotten from anything.” [caption id="attachment_2497" align="aligncenter" width="200"]

Your own story is the hardest to tell, and self-promotion can be tricky to master. “We have this belief that it’s cocky or conceited to want to be the center of attention,” Davis says. “We’re so caught up emotionally in our work that it’s hard to put a price on ourselves. It feels selfish.” And self-promotion doesn’t come that easily to Davis: “If I didn’t have a business, I wouldn’t have an Instagram,” Davis says. “It’s hard to realize that your story is important and someone cares.” How to get started? “You just do it,” she advises, “and then you realize you can get a contract worth thousands of dollars from a DM.”

In her previous life as a photographer in Montana, Davis did photography and graphic design (to name just a few of her roles) for a food startup. They sent her to The Fancy Foods Show at the Javits Center. It was fate: “The only reason I went is because the owner was pregnant and couldn’t fly.” On the trip, she took a cooking class that visited the Union Square Farmers Market, which is when she realized she “had to be there.”

When she first moved to New York in September of 2015, she didn’t have a job lined up — just about $4,000 in savings and a goal to have a job by November. Davis knew she would have to build her network. She started messaging strangers on LinkedIn, saying, “‘I’m looking for a job in NYC, and I would love to hear how you got where you are.’ People love to tell their stories.”

From there, Davis lined up a bunch of coffee dates, and soon, through the magic of networking, she had landed a permalance position at Time Inc. In 2017, a rival publishing company poached her, only to lay her off 5 months later. “That was one of the best days of my life. I was so stoked. I was miserable there. I needed the push off the cliff to start my entrepreneurial journey.” That same day, she was invited to an event hosted by the women’s networking group Six Degrees Society. “I was like, ‘Oh my god, these are my people.’”

Moving to Manhattan also took away some of the glamour that people in Montana associate with New York gigs. She recalls their reaction as, “You work for the same place that does Real Simple? That must be so magical!” “When really,” she observes, “It’s just people behind computers.” And once you see the man behind the curtain, you realize what’s possible.

Like any good CEO, Davis delegates. “If I f*ck this up because of money, that’s just stupid,” Davis thought to herself, before sitting down with a financial advisor. “That’s one of the biggest things in entrepreneurship — investing in yourself and outsourcing,” she says. “I have an accountant I will never let go of. I don’t touch my books. It’s not my zone of genius.” (Related: The Freelancer’s Guide to Tax Preparation.)

She even paid a brand designer, Tracy Dungo, to design her website, despite having her own background in design and branding. “That was my first big hire and investment,” Davis says. It wasn’t easy to be on the other side of that exchange. “I found myself to be pretty dang picky,” Davis says. She kept telling Dungo, “I feel like the worst client. I  kept saying, ‘I hope I’m not asking too much. I hope I’m not being a snob about this.’” But her pickiness paid off. Through her design, Dungo also helped tell Davis’s story, which helped Davis to “Figure out my ideal client.” She sees Dungo as much more than a contractor: “She’s kind of my first coach. She’s a mentor to me.”

Ready for a New Adventure

Another mentor helped Davis realize what she wanted for her career when she asked, “What does your morning look like in your dream life? Are you going to an office? Are you meeting with a bunch of different clients?” Davis says she realized she doesn’t want to have just a few clients: “I’m too Gemini for that,” adding, “I get jazzed by meeting and connecting with a ton of different people. Each person and their story fills my cup.”

Davis’s cup overflows with stories, and no longer feels like she needs to be in New York City to tell hers. “I love New York to death, but once it takes more energy than it’s giving, then it’s time to go.” Davis was planning on embarking on a nomadic chapter starting in June, before the pandemic threw a wrench in her plans. Now, she says, “I have re-fallen in love with New York, as you do.” Typically, she says, “There’s always something to do, a networking event to go to — there’s so much pressure as a freelancer.” But now, “New York is taking a breather,” and Davis is taking a breather right along with it.  It isn’t a sigh of relief, but a deep, cleansing breath, as she figures out new ways to do what she does best.

‍Wingspan can help you take a breather and streamline your business with easy-to-use invoicing and bookkeeping services. Sign up today and claim your personalized pay link.

‍Nick Treadway: How This Freelance Software Developer Turned a Layoff Into a Launch

‍Brooke Wilson: How a Newcomer Stays Confident, No Matter What

‍Will Pay: How a New York City Muralist Got His Start